I've been reading a lot of posts and arguments regarding hostile religions. Many point to ancient histories documenting hatred and atrocities of many religions against another. It is sad but true that ancient peoples harshly dealt with one another and that religion was often used in judgment and persecution against people. What is of more interest and concern to me is religion in modern times and how we deal with our fellow man. Unfortunately, hatred and intolerance is still taught in many modern religions. How people mete out that hatred and intolerance is wide ranging. Some religions teach that people without faith or of differing faiths need *saved* and brought into the fold of the *one true god* while at the other extreme is to annihilate and remove from the face of the earth anyone who does not convert and honor their chosen god. The former is a disrespectful annoyance and the latter is a terrorist movement by radical extremists.

It is understandable that people with similar beliefs and lifestyles will group together and live somewhat peaceably in their commonality. However, when any group of people goes militant and believes they need to make conquests of nonbelievers either by peaceable coercion or force, they have crossed the lines of civility.  When death is involved, they have crossed the lines of humanity.

Spirituality is a personal journey for each person and each person has the right to seek as they choose. No person should have the right to force their beliefs upon another. If a person wants to *witness* for their god/s, the best way to do so is to live as the best example one can be of the faith followed. People may then be drawn to that religious path or perhaps they will just honor you as a good and righteous person. All people do not feel compelled to follow a god of any type. This doesn't mean they are *lost* nor does it mean they cannot be just and good people in the absence of god/s. Too often religion is used as a crutch in the world to deflect responsibility for ones actions -- you will hear things like *it is the will of ----* fill in the blank for a god's name. The gods do not live our lives -- our lives are ours to live. I cannot imagine any god of any path desiring that we wipe out non-believers. I personally would not desire to follow such a god.

If a person is caught up in a spiritual path that makes mandates upon you to adjust your behavior and dress or be punished in this world and the next, then perhaps one should look up the meaning of a cult. When one loses their autonomous individuality and must synchronize with the members of a group with rules from prophets, they are nothing more than a puppet attempting to mirror the lives and actions of others. To me that is failing at life.  If you choose to give up the right to live and make choices in your life and instead deliver all your decisions over to elders of a religion or even to a god then you have abandoned your gift of life. You are not living you are existing in fear and failure because those religions will have you believe that you are unworthy and must strive under the yoke of sins committed before you were even born.

Chose your spirituality wisely, make certain it is truly your choice and not one of coercion or indoctrination, make certain you retain the right to think independently and able to act in accord with your personal conscience, that you fully understand what is asked of you and not blindly following because you *must* do it that way, and most importantly be the most loving and best person you can be on any path that you choose to follow -- love and honor your fellow man/woman and their right to live their lives under their own conscience.

Bright blessings to all,
May those you pray to watch over you,
Rayven Michaels
Wiccan Witch of the Midwest
at February 22, 2015 No comments:

I love the Earthbound store. Every now and again, I venture in and prowl around to see if there is anything that intrigues me. Today I made a nice haul. One of my trophies was a labradorite bracelet. I admit the setting is cheap but decorative and looks nice. The big deal for me was the stone. I LOVE labradorite. It is a very amazing stone with lots of metaphysical properties. I've included a photo of the bracelet. I'm sad to say that the photo does not do the stone justice. 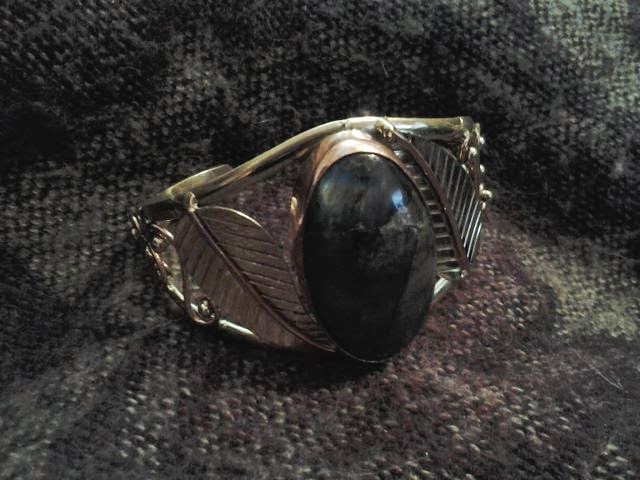 This stone has incredible metaphysical properties. Did I say that already? It is a seer's stone for sure. Here's a link to a website that gives a good accounting of all the wonderful properties of this stone:
Crystal Vaults.

If you don't already own a labradorite stone, I strongly encourage you to consider doing so. You will be very glad you did.

Bright blessings to all,
May those you pray to watch over you.
Rayven Michaels
Wiccan Witch of the Midwest
at February 21, 2015 No comments: