January is named after the Roman God Janus.  However, the January Full Moon is known by a variety of names:

Power Flow: Sluggish, below the surface; beginning and conceiving. Protection, reversing spells. Conserving energy by working on personal problems that involve no one else. Getting your various bodies to work smoothly together for the same goals.

This is a good time to work on magic related to protection, both physical and spiritual. Use this time to develop your inner self, and advance spiritually, becoming closer to the higher aspects of your deities.

Other full Moon info from About.com

Imbolc, one of the eight Sabbats on the Wiccan Wheel of the Year, is Feb. 2, 2013.  It is the time of year halfway between the Winter Solstice and the Spring Equinox.  The Romans called it Lupercalia, the Egyptians celebrated it with the Feast of Nut while Celtic traditions honor the Goddess Brighid, or Saint Brigid after Christianization.  In addition to Saint Brigid's day, another Christian celebration for this time is Candlemas when the clergy would bless candles and people would light them in each window of their homes to ward off the darkness of mid-winter.  But what most children know this time for is Ground Hog Day where Punxsutawney Phil serves as the official weather forecaster by coming out of his hole and if he sees his shadow, we have 6 more weeks of winter.  I personally hope dear little Phil does not see his shadow and we can move on to Spring.

Here is an old English saying:

If Candlemas be fair and bright,
Winter has another flight.
If Candlemas brings clouds and rain,
Winter will not come again.

One of the things that I associate this time of year with is my Father's birthday on February 1 who was born just after midnight and only minutes after his twin brother.  He was an inspiring cancer warrior that lost his battle at the Fall Equinox of 2009.  And yes, I can hear you now. Love you Dad.

For more information about Imbolc, visit History of Imboc on About.com. 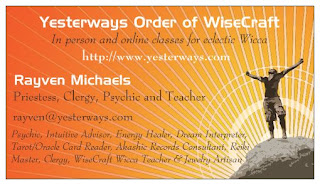