How to cleanse your house of negative energies

I get asked this question quite often -- how to cleanse a house of negative energies. There are many ways to do it but below is the method that I use. I included my video and directions.

Samhain and Halloween -- There is a Difference 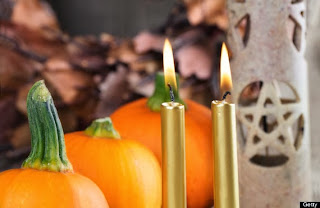 I would like to start off by saying that Halloween is NOT the "Witches Holiday". Halloween is a holiday for little children to get candy, and for Adults to decorate their houses with scary witch and ghost figures. The true Witches Holiday is Samhain, pronounced "Sow-en" by most people of the Craft in modern day. Samhain literally means "Summer's End", and it marks the end of the harvest. A time when our ancestors would harvest their crops one last time to prepare for the long winter ahead.

Samhain is a Celtic holiday. The Celts divided the year into two seasons, the light half and the dark half. Samhain is a celebration of the Beginning of the Dark half of the year, and was actually considered to be more important than its counterpart, Beltane for its magickal potentials.

Samhain is considered a "cross-quarter" Sabbat, even though it always falls on the 31st, and the cross-quarter doesn't officially occur until the Sun reaches 15 degrees of Scorpio, sometime in the 1st week in November.

Samhain also symbolizes the death of the God, the final turn of the wheel. The days become shorter, the nights longer. Also, Samhain falls between the Autumnal Equinox and the Winter Solstice, a time when the "veil between the worlds" becomes very thin. It is a time to pay homage to our elders and ancestors that have passed from this world to the next.

This time is a time much like Thanksgiving, a celebratory feast in which we celebrate the year's bounty, and remember those who have passed. Many people of the Craft hold traditional "Dumb Suppers", called a Feast of the Dead, in which a large meal is prepared and eaten in silence, with an extra place set in remembrance of our ancestors. Many also light a candle to bring in the "New Year", lighting their way through the darkness of the upcoming months until Yule.

(NOTE: this same article is quoted heavily around the internet so I am uncertain of the original source or its author, however, the source from which I copied is: http://hearthsidecuups.tripod.com/wheeloftheyear.htm)
at October 31, 2013